Overview of DCF and HCF

The original 802.11 standard defined two methods in which an 802.11 radio card may gain control of the half-duplex medium:


Specifics of DCF and HCF

DCF has four components as checks and balances that work
together at the same time to ensure that only one 802.11 radio is
transmitting on the half-duplex medium, these four checks, all function at the same time: 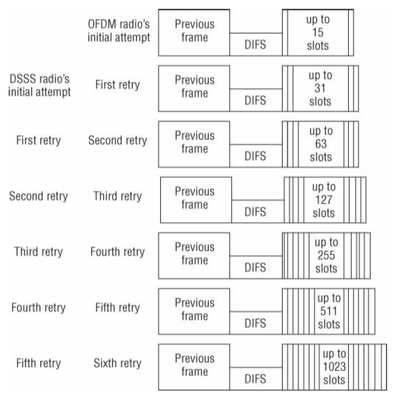 Figure 8.6 Contention window length
The following example is a simple review of the process:


The random backoff timer is another line of defense and helps minimize the likelihood of two stations trying to communicate at the same time, although it does not fully prevent this from occurring. If a station does not receive an ACK, it starts the carrier sense process over again.
Reference:
Coleman, David D.,Westcott, David A. CWNA: Certified Wireless Network Administrator Official Study Guide: Exam CWNA-106 Wiley.