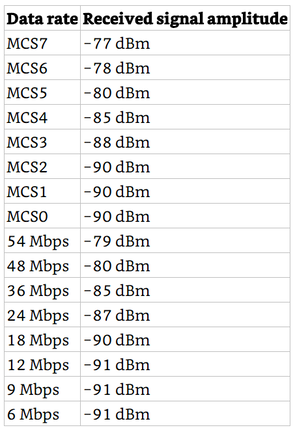 The 802.11-2012 standard also defines another metric called signal quality (SQ), the signal quality could be a measurement of what might affect coding techniques, such as the Barker code or Complementary Code Keying (CCK), which relates to the transmission speed. Some SQ parameters might also be used in conjunction with RSSI as part of a clear channel assessment (CCA) scheme.

Although SQ metrics and RSSI metrics are technically separate measurements, most Wi-Fi vendors refer to both together as simply RSSI metrics.

Although the way in which Wi-Fi vendors implement RSSI may be proprietary, most vendors are alike in that they use RSSI thresholds for very important mechanisms, such as roaming and dynamic rate switching. During the roaming process, clients make the decision to move from one access point to the next. RSSI thresholds are key factors for clients when they initiate the roaming handoff.